Actor/Model Steve Hamm celebrated a full career in the army as a helicopter pilot, but after he retired, he caught the acting bug. Thus far he has appeared in films and TV projects including “Deliver Us From Evil”, “The Warriors”, “Law & Order”, “Third Watch”, and “The Marvelous”, just to name a few.

He carries with him the ability to pilot a commercial helicopter, proficiency in a variety of military weapons, and a perfect look and movie/TV persona. I exchanged some intimate questions and answers with Steve regarding his career, his character, and his personal ambitions…..

An internal passion for success. I enjoy hearing or reading about someone’s lifelong dreams or goals coming true due to all the hard work they put into achieving it. It takes determination, commitment, and self-discipline to achieve complete success. Nothing great ever comes easy. How we overcome challenges and obstacles shows just how determined we are to make these goals and dreams a reality.

Is there a moment in your life that you recall that became your biggest Triumph?

There are a few actually. I would have to say my first biggest triumph was getting accepted in Rotary Wing Flight School while serving in the Army. It was a rigorous application process. Besides completing the basic application forms, there was a flight physical, a flight aptitude test, and recommendations that had to be obtained. Luckily, I was selected on the first look at the board.

The second one was when I completed the SERE (Survival Evasion Resistance Escape) Level C course. This was an intensive three-week course which taught us how to do our best to avoid getting captured by the enemy, and if we did, how to survive becoming a prisoner of war (POW). This course was both physically and mentally challenging. The Level “C” meant that the instructors could physically slap you around in order to get information or as a punishment for disobeying a camp rule.

This was required training for all newly graduated pilots who were on orders to overseas assignments. This course made us learn about ourselves on several different levels.

The third one was when I officially retired from active duty service after 23 1/2 years. I had spent nearly a quarter of a century serving my country, the last 5 of it with multiple combat deployments. I was extremely grateful to have had the honor of working alongside some of the best people this country has to offer.

Do you have a favorite movie that you wish you had been in?

There are two. “Gladiator” with Russel Crowe and “The Equalizer” with Denzel Washington. Both of these actors are top notch. Gladiator was very epic and The Equalizer was a great “bringing justice to an unjust world”.

How do you define creativity?

This is a tough one. Let me think a minute.. I would say that creativity is when we let our imagination flourish and then let it guide the choices that we make.

What has been your biggest challenge in the acting industry?

Dealing with rejection and location. This business has a 99.9% rejection rate. For the bigger projects, there are usually thousands of actors auditioning for one role. You have to make a bold choice and decide how to stand out from the rest.

I live in NE Ohio, so the opportunities here are a bit limited. If you live in NY or LA, you have more opportunities, plus you also have the ability to physically be somewhere in a matter of hours.

Tell us a little about the roles that you have been in?

Self-taping for auditions has become a normal thing lately. Still, if you live in the general area, the Casting Director has the ability to use you faster, rather than having to wait a day because of travel. 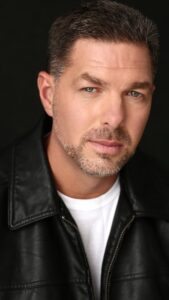 My first on-screen speaking role came when I was cast in “Crisis in the Valley”, directed by David Walker. He found me after I replied to a friend on her Facebook post. My character was married to a black woman. They had some serious issues plus he had a secret.

I have played various cop roles, including a desk sergeant in “Memoirs of Wroth City” and a featured Detective role in “Acts of Violence” with Bruce Willis. I have played a father/husband role whose life was spinning out of control in the independent film “Buzzing in the Garage”. Most recently, I played the Mayor in “Common Creed; The Epidemic”, now available to watch on Hulu.

Do you think that your Army career helps you and your new acting endeavor?

Oh, absolutely! The military installed several core values that made me who I am today. Honor, Integrity, Selfless Service- these are just a few. I am a consummate professional who strives for excellence. I am always on time, prepared, and willing to help others in their time of need. I feel that these skills, among others, are essential for a successful acting career as well as success in everyday life.

What do you think your greatest asset is?

I feel my greatest asset is that I genuinely care about people. I feel that everyone deserves to be treated with respect and dignity. I am also cool under pressure.